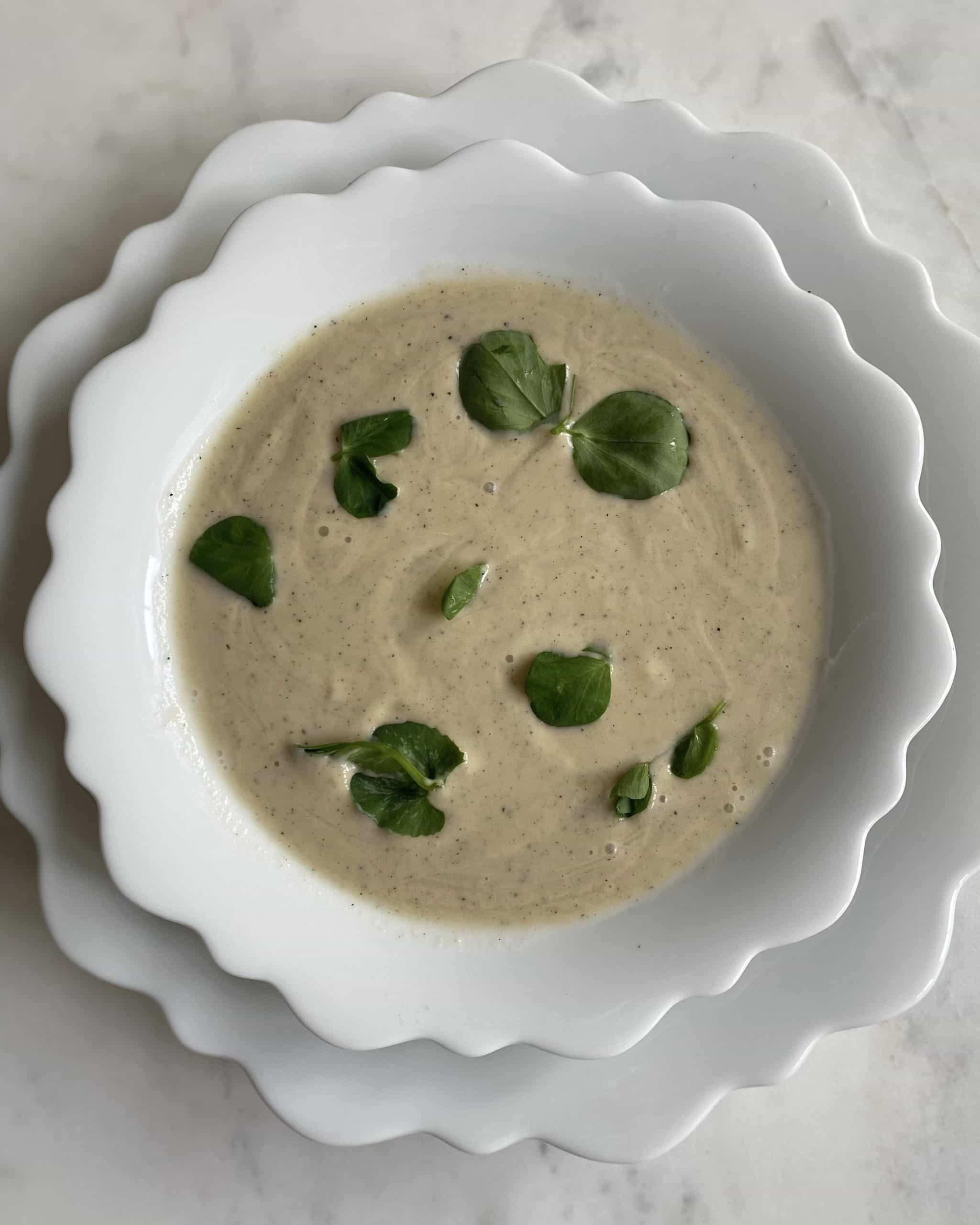 This recipe comes from Chef Jamie Simpson of The Chef’s Table. He is a genius when it comes to making super delicious vegetable forward recipes. It is easy, healthy and magnificent, and a perfect warming winter soup. Caramelizing the parsnips is the magic trick to making this soup sweet, and with a lot of depth. The original recipe calls for a little salt and maple syrup – but I have to tell you, it doesn’t need it! The micro watercress greens add a nice herbal note and texture to the soup.

1- Place a large cast iron skillet or heavy bottomed pan on high heat until smoking. (Do not use a non-stick pan)

2- Meanwhile, place the almond milk in a 2-3qt. saucepan over medium heat and bring the liquid to a low simmer.

3- Place the prepared parsnips in the cast iron skillet. And turn the heat to medium low. Caramelize the parsnips, turning the pieces over and over until browned on both sides. Be careful not to blacken the parsnips, but make sure they are a beautiful dark golden brown.

4- Transfer the parsnips to the saucepan filled with almond milk and continue to summer until the parsnips are fork tender, about 15 minutes.

5- Transfer to a blender and blend on high until very smooth. Taste to see if you want to add the ½ tsp. Maple syrup and salt.

6- Strain the soup through a fine mesh strainer for a smoother, thinner texture. Otherwise have it thick and yummy! Adjust with additional almond milk if needed to account for evaporation.

Ladle soup in a bowl and top with a generous amount of micro watercress.

When I learned about Pink Pineapple from the wonderful produce company, Melissa's Produce, (they source the most amazing fruits and veggies,...

We found a really ripe Jackfruit in September which is the perfect time to start enjoying pumpkin spiced everything! So we...

For Rosh Hashanah, the Jewish New Year, we dip apples in honey to ensure a sweet New Year.  Might as well...